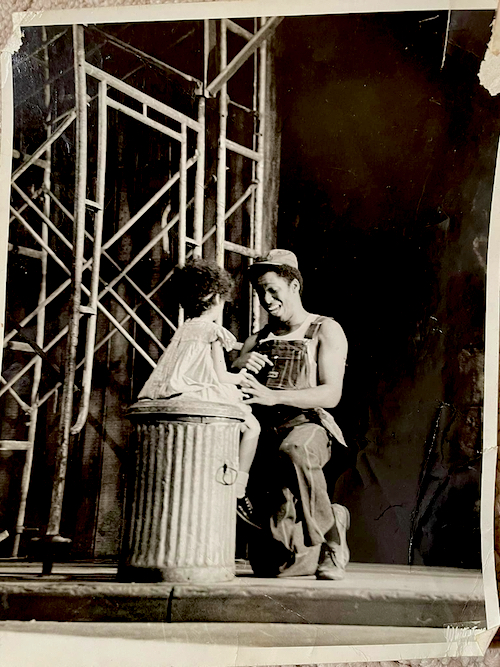 Dr. Moore’s friend Jennifer Cooke Dino shared this picture, which was recently rediscovered, tucked away in a closet down east. Dr. Moore explains in another Facebook post: “Oh my goodness!!! This is a picture of me singing to the girl acting as my daughter in the opera, ‘Street Scene’. I was performing the role of the janitor, Henry Davis, in the 1976 John Brownlee Opera production in New York City.”

“Street Scene” premiered as an opera in 1947. Its cast of New York tenament house characters explored issues that remain relevant today: gun violence, immigration, ‘law and order’ and economic disparities. Lyricist was Langston Hughes. Dr. Moore recalls that there were about three performance of the opera in spring 1976.

Dr. Moore says there were four principal singers in the show. He said his roommate at the School of Music, “Norman Large, was one of the principal singers. He recently starred in ‘Phantom of the Opera’ and performed in several Star Trek episodes.”

After the “Street Scene” semester, Thomas Moore was back in Charlotte for the summer and, in July 1976, held a workshop on “black and white spirituals” on a Sunday afternoon at Seigle Avenue Presbyterian Church.

We have not found a recording from the Brownlee Opera production, but a clip exists from the 1947 Broadway cast recording involving Creighton Thompson singing the Henry Davis song, “I Got a Marble and a Star.”